Don’t bother with 11/22/63 by Stephen King. I think King is a talented author and have enjoyed the books of his that I’ve read, but this story wasn’t worth the time. Definitely not worth the time it takes to read 880 pages. 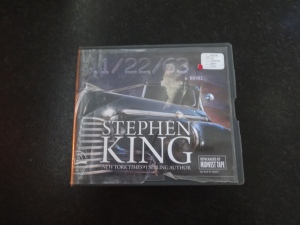 This is the story of Jake Epping, a man living in Maine during the year 2011, who finds himself pulled into a plan to stop the Kennedy assassination from happening in 1963. How will he do this when he hadn’t even been born by that year? Through a time traveling portal of course. It’s an interesting idea, and the book is pretty well written, but its just WAY too long. The story backtracks over and over again and although I wanted to learn whether Jake accomplished his mission, I found my mind wandering on multiple occasions.

For those interested in the Kennedy assassination, and all of the conspiracy theories out there, this may be just the book for you! I wouldn’t recommend it to many others though when there are so many other great books out there and so little time to read them.