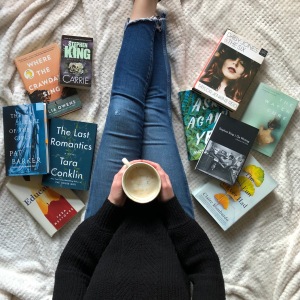 It’s been a year filled with reading, writing and reviewing, however it wasn’t until I started to think about a 2019 wrap-up that I remembered I haven’t posted a review on the blog during 2019. As I focused more on writing and reading, my reviews turned miniature and were posted only on Instagram. Well, I’d like to take the opportunity during these last couple days of the year (and decade) to praise some of my favorite reads from this past year!

In no particular order…

Daisy Jones & The Six by Taylor Jenkins Reid
Through interview-style writing, Jenkins Reid somehow managed to transport readers to the 1970’s rock-n-roll era in this book. Looking back, these interviews tell the story of how the band got together in the first place, their wildly successful years and the mystery of why they broke up.

On Writing by Stephen King
Originally, I borrowed this book from a friend, but once I started to dig into it I went out and bought my own copy because I knew it would be filled with post-its and notes before long. Between snippets from his past and his process for writing, King manages to share insights about the craft of writing that I found to be inspiring and instructional.

Carrie by Stephen King
I may be the last person on earth (kidding!) to have read King’s famous thriller, but I can easily say that Carrie topped my reading list this year. It’s spooky, strange and even a little endearing. Is it too early to plan to read this on Halloween 2020?

The Last Romantics by Tara Conklin
A family saga told from the perspective of the youngest of four siblings that spans the entirety of their lives beginning from the pivotal moment they call the Pause. This will ultimately impact them for decades to come. A big focus of this book is cause-and-effect and how our choices and circumstances shape us.

Ask Again, Yes by Mary Beth Keane
Reminding me a bit of Romeo & Juliet, this book begins when two cops working in NYC become neighbors in the suburbs. Their young children become close until a tragic incident tears the families apart. Try as they might, the two children (Peter and Kate) cannot stay away from one another and this forces everyone involved to reflect on the power of forgiveness and time.

The Most Fun We Ever Had by Claire Lombardo
While this book may look daunting (it’s long), this character-driven story spans generations of the Sorenson Family. I really appreciated the authenticity that Lombardo portrayed through the relationships between the four sisters and their parents.

My Sister, The Serial Killer by Oyinkan Braithwaite (Not Pictured)
It’s been months since I read this sharp, short thriller and I cannot stop recommending it. From the intriguing idea to the fresh writing, I couldn’t put it down. When her sister calls to tell her that her boyfriend is dead, Korede helps clean up the evidence. It’s only when her sister’s third boyfriend dies that Korede begins to question everything.

Silence of the Girls by Pat Barker
The Trojan War is shown from a different perspective, from Briseis (a Trojan queen and captive of Achilles), in this book. As a prisoner, she observes and experiences the horror inflicted on those imprisoned in the Greek army camp. It was fascinating to read this well-known story from a different lens and the writing was absolutely captivating.

The Water Cure by Sophie Mackintosh
Haunting and hopeful, this book is magnetic. Three sisters are raised in isolation and taught to fear men along with the toxicity of the outside world. When their father disappears and three men appear on their shore, everything changes. It’s heavy and lonely and stays with you after you set it down.

Where The Crawdad’s Sing by Delia Owens
It was just announced that this book has sold over 4.5 million copies and I’m not sure whether this came as a surprise to anyone considering that this book is just so good. If you haven’t read the story of Kya, the Marsh Girl, I highly recommend that you do. Raised in a rural marsh on the North Carolina coast, Kya is brave, intelligent and extremely independent. I was rooting for her from the first page.

Educated by Tara Westover
From the very first page I was completely captivated and shocked by this raw, reflective memoir. Westover, who as a child lived off the grid with her family, managed to educate herself and eventually find her place in academia. I wish I’d read it sooner!

Becoming by Michelle Obama (Not Pictured)
An amazing memoir written by an amazing leader. In Becoming, Obama shares her journey from childhood through present day (published in 2018) in a series of hopeful, moving stories that are at once personable and inspiring.