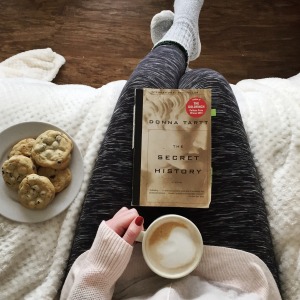 As soon as I finished The Secret History by Donna Tartt, I wanted to pick it back up and read it again. Needless to say, this is a very good story.

Richard, who is from an area of California described as dry and desolate, comes to Hampden College in Vermont. On campus, he sees group of Classics students (the only Classics majors in the school actually) and he becomes instantly infatuated. At Hampden, Classics is an exclusive course (only five students per one professor), but somehow Richard is accepted in.

The five, now six with Richard, students are misfits of sorts and are deeply influenced by the thinking and practices of their Greek studies. That is, until things go too far and everything seems to spiral out of control.

The characters, especially the six Classics students and their relationships with one another, fascinated me. Tartt is a master of dialogue – I could hear each character distinctly by the tone of their voice.

I also enjoyed that the narrator (Richard) speaks directly to the audience, pulling us readers into the story! 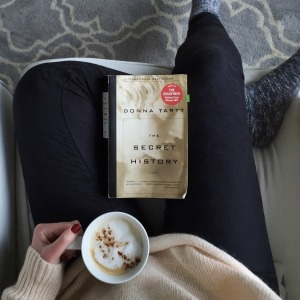 I read another one of Tartt’s books, The Goldfinch, a few years ago and while I was intrigued by the story and the characters, the book lost me when it droned on and on in the end. I thought that it could have packed a bigger punch without the last 200 pages. BUT (and that’s a big but) I loved The Secret History.

Some of the passages I marked include:

“’…then what is desire? We think we have many desires, but in fact we have only one. What is it?’ ‘To live,’ said Camilla.”

“But of course I didn’t see this crucial moment then for what it was; I supposed we never do.”

“She was the Queen who finished out the suit of dark Jacks, dark King, and Joker.”

“He was like a propagandist, routinely withholding information, leaking it only when it served his purposes.”