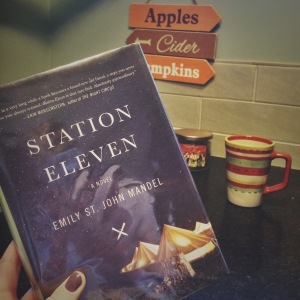 I’m having a hard time deciding how to put my opinions of Station Eleven by Emily St. John Mandel into words. I definitely liked the book; I’m just not sure how much.

On one hand, it’s a very interesting story, which centers on a massive case of the flu that has wiped out a majority of the world population and has left those remaining living in shambles.

Station Eleven jumps between decades, from before and after the collapse, and focuses on many characters whose lives are interconnected. We have Arthur Leander, a famous actor who dies on stage while performing a play on the evening when the sickness hits Toronto. Then there’s Kristen, one of the child actors performing with Arthur in the play, who survived the sickness and goes on to join the Traveling Symphony. We also have Jeevan, a training paramedic who realizes the epidemic is coming in time to store enough food to save himself.

My critique of this book is that I wasn’t able to connect with the characters as much as I would have liked. My favorite books are those in which I feel for the characters, but I don’t think that Mandel went far enough with her character development. They intrigued me, but not enough to make this book a favorite for me.

Overall, I liked this book and thought it was a unique choice that’s different from stories that I normally read.