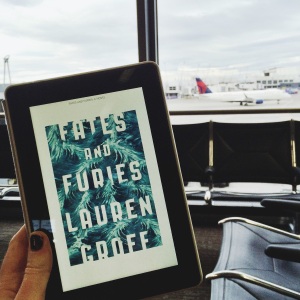 To be honest, I was expecting more from Fates and Furies: A Novel by Lauren Groff. Maybe I picked up the book with expectations that were too high, but the choppy writing and negative tone disappointed me. That isn’t to say that I didn’t like the book entirely, the story has many intriguing aspects including a look into the relationship of marriage.

Fates and Furies: A Novel is split into two halves, the first told from the view of Lancelot, known as Lotto, and the second from Mathilde. Meeting when they were each 22 years old, the pair marries two weeks later to the shock of their peers and families. While Lotto is a lover and has a charisma that people are drawn to, Mathilde is a loner who had a terribly sad childhood. Despite their differences, or possibly because of them, the couple fits together well and ends up outlasting other’s expectations of a divorce.

I was both frustrated and absorbed by the couple’s relationship. Lotto is arrogant and unaware while Mathilde is conniving and manipulative. It was clear from her section of the book that she plays on her husband’s weaknesses. Theirs is an interesting relationship because they love each other deeply, but each doesn’t feel that they deserve the love of the other.

I was intrigued by the sense of rawness throughout the story, of uncensored humanity, including the good, bad and the ugly. It was also interesting to experience scenes from the different perspectives of the husband and wife. The idea that people view and remember the same experiences so differently is one of the reasons why I chose to read this book in the first place.

Unfortunately, I had a hard time getting into the story and even when I finished, I didn’t feel like I was ever completely engaged. The story is choppy, skipping around from different perspectives and time periods, and while some characters interested me, others were dull and had me rushing through the pages.

Fates and Furies: A Novel is focused on one of the most fundamental relationships of all, marriage, and I felt sad after finishing it. I’m glad to have read it, but I don’t plan on picking up another one of Groff’s books anytime soon.

21 thoughts on “Fates and Furies: A Novel by Lauren Groff”