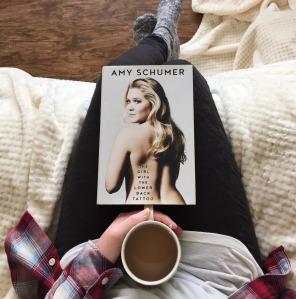 This is what I like to call a “mixed review.” The Girl with the Lower Back Tattoo by Amy Schumer is a collection of essays ranging from her very first stand-up comedy show to the time she got arrested with her sister for shoplifting (she clearly points out that she doesn’t condone stealing). If you pick up this book, expect stories that are funny and raunchy along with ones that are serious and sad.

I read the first half of the book, but the format lost me. I think Schumer is quite funny, however, I don’t think her humor translated well to the written word. I put down the book for a while and placed a hold for the audio version from the library, and that’s how I finished the book. What’s really great about the audiobook of The Girl with the Lower Back Tattoo is that Schumer reads the story herself! So on the one hand, I didn’t really enjoy reading the book, but I definitely connected with the story while listening to Schumer read the essays herself.

Beyond stories of her career, childhood and relationships, Schumer also discusses sexual assault, domestic abuse, body image and much more. These essays aren’t just funny bits filled with fluff; Schumer uses the book as a way to discuss serious issues as well. At the same time though, I didn’t need to hear so much about her beloved stuffed animal collection.

I recommend this one for big fans of Amy Schumer; otherwise, I might suggest another book instead!