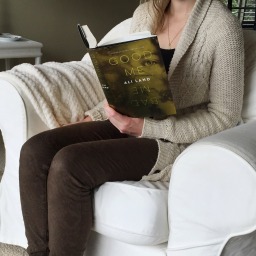 Good Me Bad Me by Ali Land, a psychological thriller, is SO eerie! The story is told by the daughter of a serial killer, Milly, and begins when she turns her mother into the police. That’s right, this particular serial killer is a female. Surprising huh? At first they didn’t believe Milly, what are the odds of a murderous mother? But the police are quickly convinced when Milly shares her terrible trauma.

While Milly prepares to testify against her mother in court, she stays with a foster family. Mike, Saskia and Phoebe, a fellow teenager, take her in and saying that Phoebe and Milly don’t get along is putting it mildly. As Milly settles into her new life, we see glimpses into the horrors that Milly’s mom put her through. Land was able to convey these awful experiences without being too graphic or gruesome, which I found to be impressive.

It’s very clear that Milly is battling against herself, her good self and bad self. Between who she feels she is and who she wants to be. She struggles to be normal, but is constantly reminded of the lessons her mother taught her and consistently speaks to her mother throughout the story, addressing the audience as “you.” The true question Milly longs to answer is whether she’s her mother’s daughter after all…

This debut novel from Ali Land is well written and chilling. If thrillers are your thing, I definitely recommend it!

2 thoughts on “Good Me Bad Me by Ali Land”