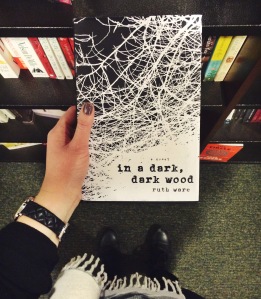 I refuse to waste the time I spend commuting back and forth from work so I’ve been listening to audiobooks over the last few months. In a Dark Dark Wood by Ruth Ware is the latest of those audiobooks. A creepy murder mystery, this one had me sitting in my car once I arrived home just to keep listening to the story.

Leonora, a crime novel writer, finds herself in a situation just like one of her plots when she goes to the bachelorette weekend of her old friend Claire. Leonora and Claire lost touched many years ago and haven’t spoken since they went to school together as teenagers, so Leonora is confused about her invitation to the weekend. Despite having a bad feeling about the whole thing she goes anyway. A couple days later she wakes up in the hospital with scratches and bruises all over her body and doesn’t remember how she got there. Someone has died, that much she hears from the police outside her room, but she doesn’t know who has been killed or how she’s involved.

Leonora describes the house they stay in next to the woods as a glass castle with the feeling that something or someone is outside watching which creates a creepy tone for the story.

At times I was frustrated by Leonora for going to the bachelorette weekend when she didn’t want to and for not standing up for herself when she felt uncomfortable. Her character did grow on me a bit throughout the book though and I really enjoyed the story. Definitely pick up In a Dark Dark Wood for an engaging and descriptive mystery!

3 thoughts on “In a Dark Dark Wood by Ruth Ware”